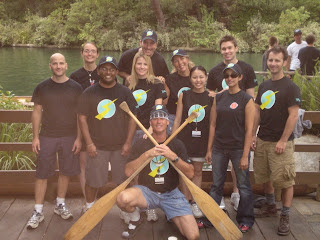 Somehow in my first few weeks at Disney I was talked into being on a Canoe team. What!? Yes... a canoe team. Its a Disney thing in which teams from all of Disney (mostly the parks... well actually all from the parks except us) race for the best time rowing a canoe around Tom Sawyer's Island. So that meant for the past few Wednesdays I've been getting up at 430am to drive to work, to carpool all the way down to Disney, to row around a smelly lagoon, then turn around and come back to work change and sit in front of my computer for 8 hours. Fun? YES! Tired?... Definitely. Within our teams we needed a male and female steerer, and somehow I ended up steering the front of the canoe. Man... I used muscles I never knew I had. But we never hit anything! I mean... other than that tree that one time. Which had spiders in it, which were all over my back since I was the first one to go into the branches. Last week was our last time rowing. We had to be in the top 16 time wise and of course came in 17th. First place losers, but we shaved a minute and fifteen seconds off of our previous time! It really was a lot of fun and a great way to meet people that I wouldn't have met otherwise. I'm definitely going to enjoy sleeping in tomorrow, but was an experience I'll probably never forget... getting soaked as AJ paddled backwards shoveling water down my back as he "helped steer", walking through backstage and seeing people painting merry-go-round horses and grooming character heads, and of course all of the mighty interesting conversations that were had. Hopefully I'll be able to see these guys every now and then around the studio. And who knows if they keep me around until next year hopefully I'll get to do it again!
Posted by Lindsay at 9:13 AM 3 comments:

So I have a blog now. 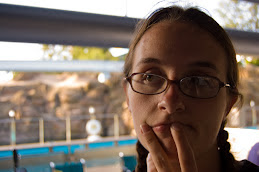